No POTUS*, no FLOTUS…

…but still a great lunch at the Islesford Dock Restaurant.

Had the *President of the United States shown up with his family for lunch here on Saturday he would have enjoyed the sparkling view of our harbor and the mountains of Mount Desert Island, where they vacationed last weekend.  On Wednesday, restaurant owner Dan Lief got a call from the Secret Service saying they would like to come out to check on the restaurant on Thursday.  Well, the presidential protectors never showed up, but the rumor was planted, and it was the talk of the island, the mainland, e-mails and Facebook.  People were saying, “I heard they’re going to Little Cranberry for lunch!”

So, of course we went there for lunch. Why not? The restaurant is on our island. When else might we be able to see the first family up close? But it was not to be. Regardless, lunch was delicious. Bruce had a Pearl Dog, my sister-in-law Karen and I had Dockburgers, and her husband Hugh had his favorite lunch; steamed mussels and french fries.

People from Great Cranberry, Islesford and off-island were there for lunch, and the restaurant was pleasantly full, but not crowded. We all smiled at each other recognizing our cleverness to be in place for the big event. Karen was the only one who had really planned for a no-show, taking the opportunity to play a little prank on the rest of us. As we were preparing to leave Karen reached into her canvas bag and turned on her iPod with its portable speakers. Out blasted the music, “Hail to the Chief” which startled everyone into looking around for the President, for just that split second, before they realized that if he was arriving, there wouldn’t actually be music playing to announce it. Everyone clapped. Later we learned that the first family had gone to the Claremont in Southwest Harbor for lunch. (We knew we had enjoyed a better meal, and probably had a lot more fun.) 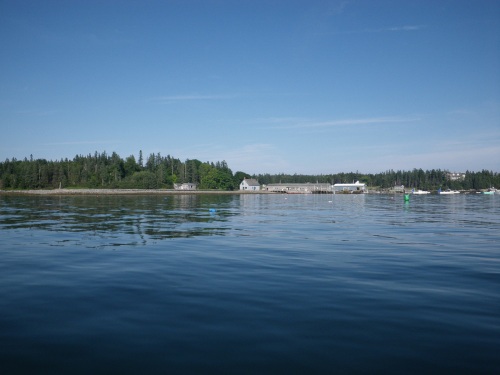