I am finally at home and ready to get back to work. I would have taken more photos if my fingers had not been getting so darned cold. The scenery this morning was brilliant. The harsh temperature created  a foggy phenomenon known as “sea smoke.”  Whenever I see it, I can’t help thinking of the first December I ever spent on Islesford, in 1976. My brother and I were renting a house together and the temperature outside had dropped into the single digits overnight. We lived across the street from what was then the Post Office, at Natalie Beal’s house, renting from the Frentrops which is now Henry Isaacs’ house.

As Wilfred Bunker drove up in his rattly station wagon to collect the mail, my brother ran out to catch a ride back down to the dock, telling Wilfred he wanted to take some pictures of the sea smoke. “Sea smoke?” said Wilfred with a wry smile, speaking loudly because he was hard of hearing, ” ’round heah we call that vapah!” 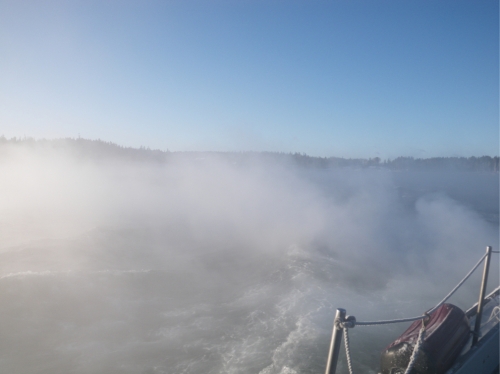