Well, I did. Yesterday. As I was trying to get some pieces together to drop off at the Center for Maine Craft in Gardiner, on April 18 when I travel south to see my friend Holly in Connecticut and Susie in New York.

I  went through a jury process 2 years ago at the CMC and was told I was accepted. I was also told they had plenty of jewelry on hand and that they would get back to me when they had an open space.  After a while of not hearing from them, I put it out of my mind. A  few weeks ago I was contacted by the manager and told that I could bring work in if I was still interested.  (Of course I am!)  They wanted it there by May 1, in time for Mother’s Day shopping. Could I bring a selection in sooner so they could choose what to display? It all seemed to fit well with my travel plans, but could I get enough work done in such a short time?

I thought so. As the week ended I planned to do my pricing on Sunday.  I started to gather my finished work. Some of it was very recent and some was made earlier this winter.  I tried to get organized and I started to panic.

I was already thinking ahead to the next deadline after Wednesday. I needed to finish up work for another gallery by the first week in May. I was going to be gone from April 18 to 24. I needed to visit my mother before I left. I needed to visit her again soon after I got home. I had a writing deadline on May 5. My brother and nephew were planning to arrive for a few days on May 4. When could I get more work done? Maybe I shouldn’t go away? Why do I have so much trouble focusing? What if the manager hates my work? Why didn’t I use my time to make more of A , B or C instead of D? Self doubt was pouring down on me…and then I heard words my father used to say, “Now, don’t get all in a swivet.”

My dad has been gone for almost 17 years, and while I hold so many memories of him, I have not thought of that phrase since I heard him say it to me as a child. I even looked up the word, swivet, to see if it really was a word or one that he had created. Yes, it’s a word and it describes exactly what I was in. I remembered advice from a friend long ago, a suggestion to follow when I felt overwhelmed by work.  “Start where you are and do what you can.” 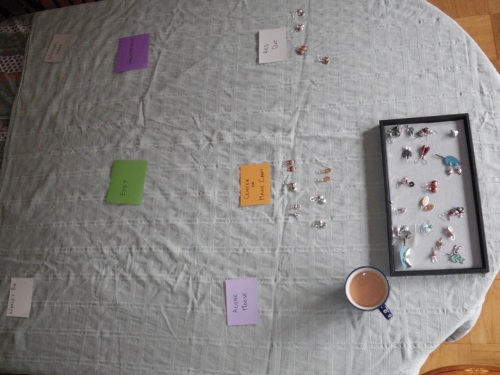 I wrote down the name of every outlet I had for selling my jewelry. I took all of the trays of work I had; including the one where I toss work to be taken apart so I can use the pieces differently, including those pieces I have already photographed for Etsy and have yet to put up in my shop, including the new work I had finished for CMC. I sorted it all. Which doesn’t look like much, but for me it was a huge step. I polished pieces and bagged each one separately with it’s own anti tarnish paper.

I did not have as much work as I thought I had for the CMC, but I had 30 pieces to price and pack up. The display space is only 12″ by12″ so that is more than enough to start with.

I was also able to set aside pieces for the next gallery deadline in early May. It’s enough to give me a head start and a clear focus on what I need to do when I get back from New York.

When I was done, I found I had the energy and inclination to clean out my freezer, another task I had put off for far too long!

Note to self: How about a label next time?  (I could not determine what this was.) 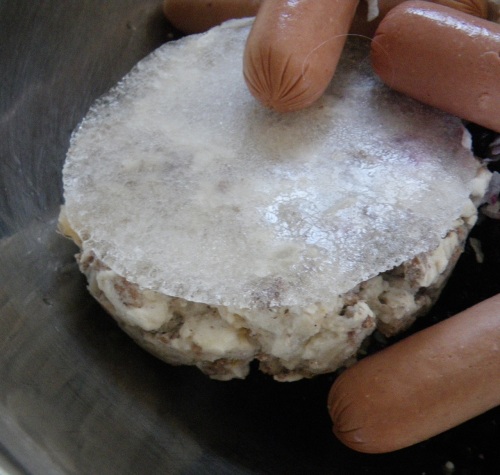 Second note to self: Don’t bother taking other people’s leftover hot dogs at the end of summer if you never eat hot dogs anyway.

Third note to self: Don’t get all in a swivet. Wear life like a loose garment.