Pretty much a perfect day

That’s what I had today. Though, I thought I was going to be off kilter when I slept in and felt it was “too late” to go for an early morning walk. I went anyway and was rewarded with a cloudless sky, ospreys calling overhead, and the tide low enough to walk most of the way home on the beach.

At the water’s edge there were two herring gulls and a smaller gull I had not seen before. He looked like he wanted to hang with the other two gulls, but as they were snubbing him so he followed a parallel path to the one I was taking. From what I can tell it was a Bonaparte’s Gull. 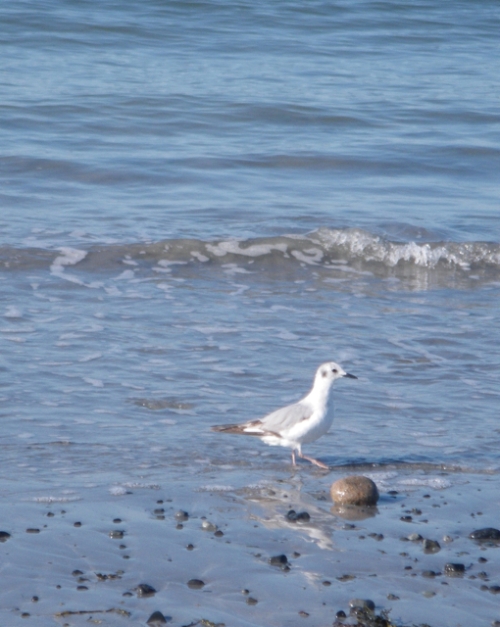 As I got back on the road, my timing was perfect for an unplanned visit with my friend Amy, who was out running. We both tend to feel a little overwhelmed by people in the summer, so we each stick close to home and don’t see as much of each other as we would like. The chance to catch up with each other this morning, before our day really started, was a bonus for me.

My morning of work in the studio was productive, and as I worked on an alternate stringing of a beach rock necklace, I was thinking how the Thai silver beads from Kate McKinnon’s sale would work in perfectly with the new design. Et voila! When I went to get the mail, after lunch, my little package of goodies from Kate had arrived. Fresh energy for me as she clears out old stuff to make room for fresh energy in her own space. (More about this tomorrow, since I have to spend most of the day off- island and a girl just has to blog about something other than fighting the crowds of people arriving in Bar Harbor for the 4th of July.)

At 3 p.m. I headed into my garden to get the rest of it ready for planting the remainder of the veggies that have been sitting in their little 6 packs, waiting. The slugs have eaten the zucchini plants but not the cucumbers. Go figure. I ridded the garden of a few dozen snails and a few of those nasty tiger slugs, planted what I could, turned on the sprinkler and called it good.

I  had plenty of energy to make a triple batch of granola after dinner, and took the time to reflect on what a good first day of July this has been.

P.S. As I was taking photos of my new goodies from Kate, at the dining room window, I looked up to notice there is a bud on my night blooming cereus plant! That scrawny looking thing has never blossomed and I’ve had it for 6 or 7 years. Yup, it was a darn good day.

5 responses to “Pretty much a perfect day”