Fun times in Portland and a bread time story

We had a wonderful Christmas in Portland, Maine with our son Fritz and his girlfriend Meg (who live there), our other son Robin (who dropped his fiancee Stephanie off at her parents’ house in Connecticut as they drove up from Baltimore), Bruce’s mother Ann, his sister Kelly and her partner Allison.

“Hey, I have an idea. Let’s pose for a timed photo of ourselves”

“Hey, I have another idea. Let’s take a second photo and all make faces!”

I couldn’t figure out why everyone was laughing at me after the shot was taken. Then I realized I was setting myself up as a chump if I was the only one  making a face. (This has actually happens to me a lot. You’d think I would learn!)

After opening presents and having a most excellent brunch made by Fritz and Meg,  we took a walk around the eastern prom. It was a little snowy and icy underfoot, but it felt good to get out.

Christmas sunset over Portland. The calm before the storm. (At this same time the next evening, the snow had started and the winds were picking up, and Bruce and I were glad to be back on the island before the blizzard hit.) 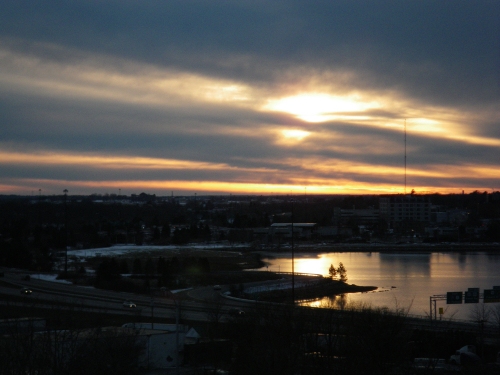 After the walk and some rest time, we regrouped for dinner at Kelly and Al’s house.  More presents, more food, more fun. And a chance to learn some bread techniques from Al.

I was inspired to try this at home. I keep my sourdough starter in the fridge, so I took it out to warm and feed it before making bread. Well, I forgot about it, and a day later decided to feed it as the power was blinking during the blizzard. I took the starter I usually would discard and mixed a bread dough with it, using the technique described in the Tartine Bread book; the same technique Al was using to get professional bakery results at home. (At work she has fancy ovens for this.) An hour later a tree came down on the island and lights went off. I stuck the dough in the fridge to wait until the next day. The next morning, with the power still out, I took the dough out of the fridge and folded and turned it at 30 minute intervals. Eventually I shaped the loaf and let it rise for the final time. Using un-fed starter and an interrupted bulk rise was not described in the book. I knew the loaf would probably be sour from what I had read about fermentation times, etc. but, I like sourdough bread. A lot!  And I have never quite been able to get the flavor and texture I wanted. I had nothing to lose with this trial loaf, but my fingers were crossed that I would create something close to what I wanted.  The power came back on in time to put the bread in a cast iron Dutch oven in a 500º oven and I baked according to the schedule in the book. Check it out!

Not only did I get a tangy loaf with a crackly crust and creamy interior, I got something else I had been looking for in making this kind of  bread…