We left our hotel this morning, headed in the opposite direction of home so we could go to Scratch Bakery in South Portland. If you are in Portland, it’s a quick 10 minute trip across the bridge to stop in at this famous local hangout. Do it! You won’t be sorry. Get there early if you want bagels. They are so popular that purchases are limited to 1 dozen, so more people get a chance to take them home. The breads are gorgeous, the cinnamon buns are light and crunchy like a croissant, and they stock some French butter that is delightful with its crunchy sea salt. And I haven’t even mentioned the sweet stuff. We didn’t expect to find our friend Al this morning, but there she was! Filling in for someone who was unable to come into work.

Tales were told of the “monster” bread. 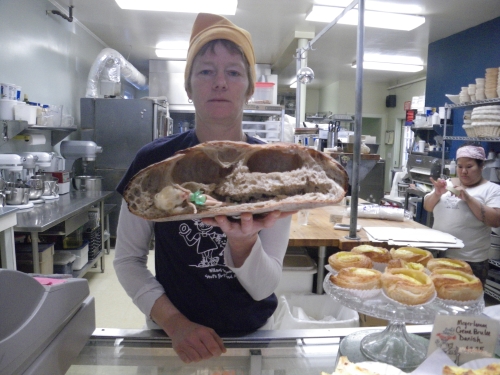 Then back we went to Portland, bagels and cinnamon buns in hand,  for breakfast with Meg and Fritz, and Rick and Stevie. Stevie had made some of her delicious chicken terrine to have with breakfast. That’s artichoke in the middle, yum. 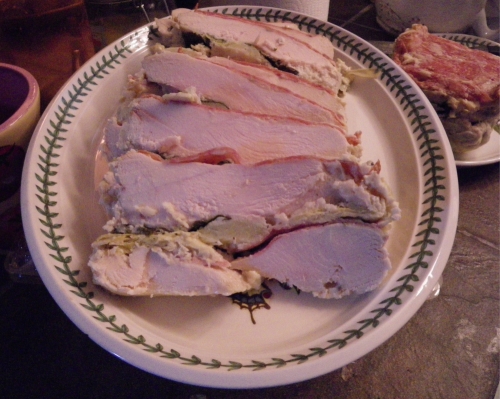 I shared with Meg what I had learned, so far, about sourdough bread. She made some dough yesterday, to rise overnight so we could bake it this morning. Al had said it would work fine to go straight from the fridge into the Dutch oven. The first loaf tasted delicious, but Meg and I both thought it could have risen a little more. The dough for the second loaf seemed pretty inactive when we first took it out of the bowl. So, we tried reshaping the dough and letting it rest a little longer in the basket. It was still pretty cold when Meg put it in the oven, but it looked like it had perked up from a little extra handling. Here’s how it looked when Meg took the lid off, before letting it cook more and brown up for another 20 minutes. 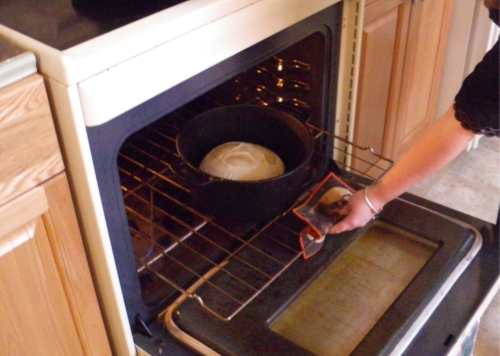 At this point Bruce and I had to leave in order pick up a few groceries and catch the 3:30 boat back to the island. I called to find out how the bread turned out, but was only able to leave a message. By the time I got home, Meg had sent this photo in an e-mail, happy to report the second loaf had come out well. I’ll say!

We were back on the island by 4. With friends coming for dinner, we headed over to the Co-op to pick up our version of fast food. Well, maybe not fast, but it’s one of the easiest dinners to cook and serve with fresh bread and a salad.